Parapara, also known as the bird catcher tree, is native to New Zealand. It typically grows on islands and coastal areas of the North Island, and is present in Auckland. In spring-summer, parapara seeds develop a glue-like coating which is designed to help with seed dispersal. This coating remains sticky for months, and traps birds of various species. Fantails, waxeyes, grey warblers, sparrows, and thrush are frequent victims; likely attracted to bugs stuck in the seed pods. Kingfishers and ruru see these small birds as easy prey, and become entangled.

Once trapped, birds struggle to fly as their feathers are glued together. As they struggle on the ground, they become covered in leaves and dirt. They are unable to find food, and they are vulnerable to predators. To survive, they need a specialised bath at an experienced rehab centre.

In 2021 so far, we have admitted 7 ruru (morepork) trapped in parapara. Most are released within a few weeks of admission, but may need to stay for several months if they have experienced feather loss.

This ruru was our most severe case. He arrived very skinny, dehydrated, sore, and covered in debris. We suspect he had been grounded for a while. 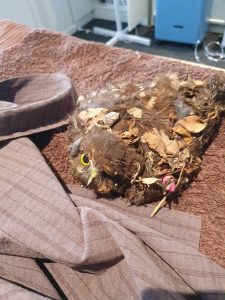 This ruru required two weeks of stabilisation before he had recovered enough to tolerate a bath. This involved daily fluid therapy, pain management, and tube feeding to slowly restart his digestive system. On day 12, he was bathed for the first time (a second bath was required after a few days).

By day 15, he had recovered from his two baths, and was ready for some exercise in an aviary! The transformation on this little one was incredible.

If you notice a parapara tree in your garden, you can help out the local bird life by trimming the seed pods each season. If you notice any birds who have become entangled, please bring them to a rehab centre as soon as possible. Don't pull the pods off, as this can cause damage to feathers.

Thanks so much to everyone who continues to bring us these birds so we can give them a second chance!