Botulism is a natural toxin produced by a bacterium (Clostridium botulinum) commonly found in soil. There are several types of botulism toxin, some of which can affect humans. Birds get their own kind of botulism (Type C). Botulism Type C is concentrated in aquatic invertebrates that filter feed sediments or water. When birds eat the invertebrates, they get a concentrated package of toxin. A bird-to-bird cycle can also exist where maggots feeding on dead birds can concentrate the toxin and can then be eaten by, and poison, other birds.

In birds, botulism presents as an ascending paralysis (meaning it starts from the legs and works its way up through the body) where the bird loses its ability to fly, swim, eat and eventually breathe. All of this while the bird is completely aware of what is happening. Most waterfowl species such as ducks, swans and coots drown as they lose their ability to hold their head up and off the water.

In Auckland, hundreds of mallards and other birds are affected every year, especially during late summer. Outbreaks in areas with high concentrations of birds such as Western Springs Park are particularly hard hit, resulting in the death of hundreds of birds every day. 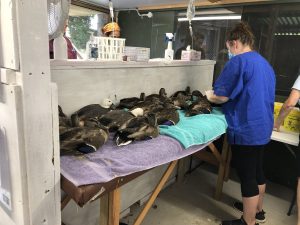 A member of the BirdCare Aotearoa team administers fluids to birds at the height of the 2022 botulism season.

At BirdCare Aotearoa, we assess and triage each bird, and provide an individual care plan so that every bird has the best chance of recovery and release. There is no treatment for botulism; birds receive nursing care to support them as their body eliminates the toxin. We support the bird’s body weight to facilitate breathing, hydrate the bird, feed them, and clean them until they are well enough to do all of this independently again. Most of the birds in our care will start recovering after 24 to 48 hours. However, more severely affected birds and some species (e.g. white-faced heron) will require at least one week before they can even stand up again.

When rescuing and caring for birds with botulism, it is important to remember that they are fully conscious and aware of what is happening to them, they can feel pain, and they will be highly stressed as they cannot move. It is important to minimise loud noises, handle these birds gently, and keep them as comfortable as possible in a clean, dry, and well-padded container. 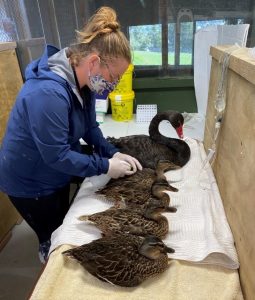 This year, our team has cared for over 650 birds with botulism. This is more than double the number of admissions in 2021. This year’s botulism season has also been longer than usual. The toxin thrives in warm water environments, so the warmer temperatures will definitely be contributing to the high numbers and longer season.

Our professional and innovative approach has seen BirdCare Aotearoa become a world leader in managing botulism in ducks. We are able to release around 96 percent of mallards after care – but we can only do this with your support.

How you can help